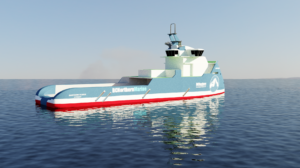 After reading several recently available websites dealing with the history of the area, I noticed several historical improbabilities in my original freelanced British Columbia Northern Railway history and timeline.

This lead me to this new endeavour, to rewrite the history with as much realism as possible.

This became a most current aspect, since the port of Stewart – now known as Stewart World Port – opened a brand-new breakbulk wharf in September 2015, which actually is operational as of recently. In conjunction with the upgraded port facilities at Stewart and its planned further upgrade to also become a bulk-terminal, the construction of the Canadian Stewart Railway (Canada Stewart Port Railway) is proposed, which almost exactly represents the trackage of BC Northern’s Cranberry Branch, with the exception of the southern part of the right of way between Cranberry Junction and Kitwanga on the CN mainline.

This kind of new realism supports the immersion and believability of my freelanced model railway.

I always wanted to freelance to be able to design locomotive variants that are unique to my railroad, to superdetail without the restriction of modeling specific locomotives or rolling stock existing in my self imposed timeframe and railroad company by using reference photos. I do actually enjoy modeling after specific prototype rolling stock prototypes. But not exclusively. Thus I wanted to have my own fictinal railroad. But it needs to make sense. And it needs to interchange with existing prototypes that I enjoyed modeling.

For me the Canadian National and BC Rail were the mist interesting railroads in North America. They had unique locomotives and the scenery I was after. My timeframe encloses the merger years of CN and BCR. The years 2000 to 2005. And a history that should explain why there could be any railroad in my chosen area at all, that simply isn’t there in reality. One hey aspect certainly is, that there were railroads at some of the places once. Long forgotten, but existing nearly a hundred years ago.

To justify the railway itself several of the mineral resource sites, that were never profitable by todays standards were virtually upgraded to account for the necessary traffic volumes.

To keep most towns as close to the real thing, only the bare minimum of changes will be made. Though I will allow myself some leeway in this regard. There need to be established industries that still produce a sufficient number of carloads.

However, if there happen to be nice folks from the area reading this, I’d like to state that this is basically fiction. I don’t intend to offend any historian or the mission of historical societies dealing with the area. I’d rather promote the area by providing links and prototype information.

After all, it is your great job and research, that makes my freelanced model railroad believable.

Thank you very much for your great work.

The BCNR Historical Society is a new news category, under which I plan to develop the BCN History in more detail. This will provide background information about the main customers of my railroad and how these industries are served. English logo description: The logo shown is supposed to depict various elements that could be considered typical for the region this freelanced model railroad serves. It shows one of the many unnamed peaks of the British Columbia coast mountains – visible from the Glacier Highway (37A) driving a few kilometers from Meziadin Jct. towards Stewart – in the background. In front of that the silhouettes of pine trees symbolising the vast forests, a flying eagle symbolizing the wildlife and a stylized member of the first nations in a canoe symbolizing the indigenous peoples of the region.